Checking in today I see a month has sped by since I last wrote. How did that happen. What have I been doing? Well its all been busy thats for sure. Since getting back from a short holiday in Greece in June we have organised the Harry Hawkes 10 mile and Ditton Dash 10k, both of which ran on June 24. The amazing sunny summer we are enjoying had already kicked in and we had another classic raceday with baking temperatures on Giggs Hill Green. The atmosphere was further heightened with England playing a group game that afternoon. Both races went really well and we have had great feedback from runners. The new 10k route proved very popular and I am sure that we will see this race grow in the future.

The start of the Harry Hawkes 10 mile 2018 on Giggs Hill Green. (that’s me starting the race on the right of the arch in yellow and purple) 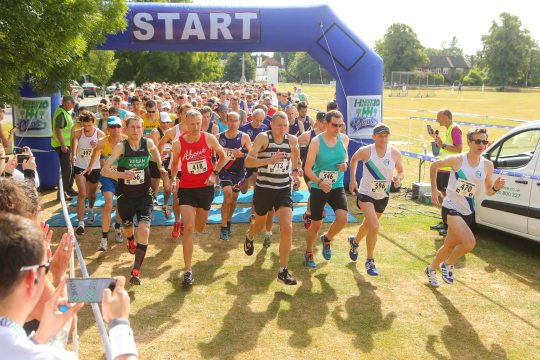 On a personal note I am very pleased to be back running regularly and although not fast, at least touch wood injury free. I got in four park runs at different locations. June 16 Kingston, June 23, Bushy, June 30 Crane Park and June 30 at Richmond. The Crane Park runwas with The Stragglers as part of a mob match against Ranelagh (which we won!). Richmond celebrated Stragglers Club Captain Phil Davis running his 100th at Richmond and 250th parkrun overall! It was followed by prosecco and chocolate brownies in the sunshine.

There were also two midweek races, the Stragglers Club 10k on June 21st which I did in 52 minutes, and the Imbercourt relays in which I took part in a four man vets team.

Then last Saturday there was the Elmore 7. It sounds like a civil rights group being held on trumped up charges, but is in fact a long established club race organised by South London Harriers as part of the Surrey Road League series. Based near the villagee of Chipstead the race starts and finishes as part of a village fete, with bouncy castles, dog training and dance displays and cups of teas served in petite china cups.

The Stragglers had targeted this race which was also part of the club Grand Prix summer series, and 39 of us turned up in yellow singlets with the trademark footprint logo on the back. With the race starting at 1.30pm and the heatwave continuing it was predictably stonking hot. Looking around it was diffficult to see anyone who was not wearing a running club vest. Clearly it was a race for athletes and not the wider non aligned running community. The impression was confirmed when the start was called and the pack quickly started to recede into the further distance. The seven mile course ran on undulating country roads and was pretty tough, not helped by the beating sun. I managed to catch a few runners and had some pass me. It was enough to keep up interest. Quite pleased to finish in 62 minutes at around 9mm pace. 205th out of 275. Given the standard, respectable!

Looking forward to the rest of the summer with plenty more action to come!

One thought on “Time flies”