By the time we had eaten at the Premier Inn in Brentwood I was feeling tired and slightly out of sorts so had gone to bed early at around 10.15. I woke on the Sunday at just after 6am and felt pretty good. John Greaves was travelling with me and we got an early breakfast and set out to marshal a point on the first stage on Sunday which started at 08.00. We got in position on a road junction at 5.4 miles and were ready when the first runner arrived. Just as well. After London, drivers in the country all seem to drive very fast and it was certainly good to wave a few Caution Runner signs to slow them down.

We drove on to catch the start of Stage 14 and watched our runners finish Stage 13, then drove on to drop my car at the end of stage 16. Due to some weird behavior by my Sat Nav this took a lot longer than it should have done and it was only thanks to some inspired driving by Karen that we reached the start of the stage in time. At 11.34 we were off on probably the hardest stage on the relay. Lullingston Park is a 13.1 mile (thats a Half Marathon!) route which is graded 10, which is the top level of difficulty.I knew that most teams would have very strong runners out for this and I would be hopelessly outclassed, so resolved to look for a steady run and aim to get in under the cut off time as a badge of honour.

From the outset it is a difficult course. Although not steep it is undulating and on uneven paths. I quickly found myself running at the back of the pack but resisted the temptation to push to keep with them as they edged away. Gradually the pack moved ahead but I still had a visual sighting when we reached Otford High Street just after 3 miles. It was here that I claimed my first scalp, overtaking a guy who had obviously dropped back. Shortly after a group of three came past and gradually went away. Clearly I had not been last at that stage.

Around 5.5 miles the course leaves the road for a track through fields and it was somewhere around here that I last sight of runners in front of me. The very useful Viewranger app came into its own at this point, showing my position in relation to the course on my phone. Nevertheless a thoughtfully paced marshal in front to the Church pointed me up the sharp right turn in front of the Church which I might otherwise have missed. The next section was across open fields and I had some routefinding difficulty , but then noticed two runners climbing a hill by a wood and recognised this from the route description. I set out to follow and noticed they were walking. Gaining ground I reached a stile, but after climbing over found the steep grass hill just too steep to run and also had to walk for a hundred metres or so. As the path moved into a forest track I began to run again and after a few minutes passed the two ladies. Shortly after we turned onto a very steep lane leading down which was hard to run. After a long decent the two ladies drifted past me. They were chatting. I was struggling to keep control of tightening legs.We were now around mile 8.

The next 3 miles were on a narrow road of a section called the Pilgrims way. It was the middle part of the day and getting very hot. The road is narrow and throws up the heat. It is also undulating so you cannot settle into a steady stride. The ladies ahead drew away then started walking again on the inclines. I passed them on the up sections, they came back after the descents. But the long hill around mile 11 I gave me a chance to pull away  and they never got back in front again.

At the finish the timekeeper was Jim Sell who congratulated me on finishing. “But have I made the cut off? I asked. Yes, with 10 minutes to spare was the answer. Finished 47th out of 50 runners in a time of 2hrs 16 minutes 27 seconds at an average pace of 10.37 mm. 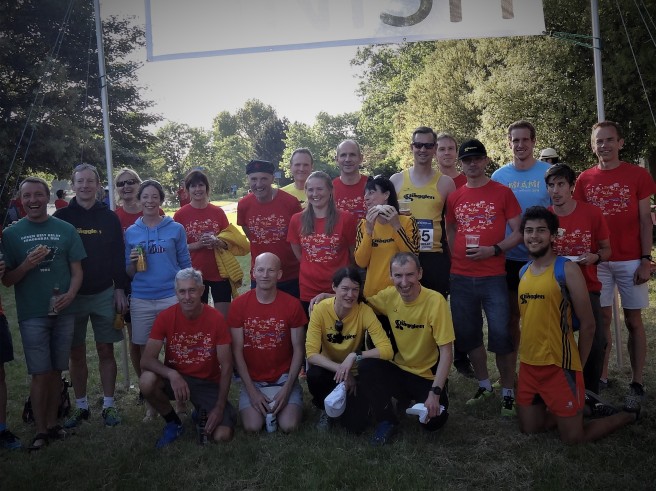 Some of the Stragglers team members at the finish in Ham on Sunday evening. That’s me back centre in the black combat cap with the red Che star.